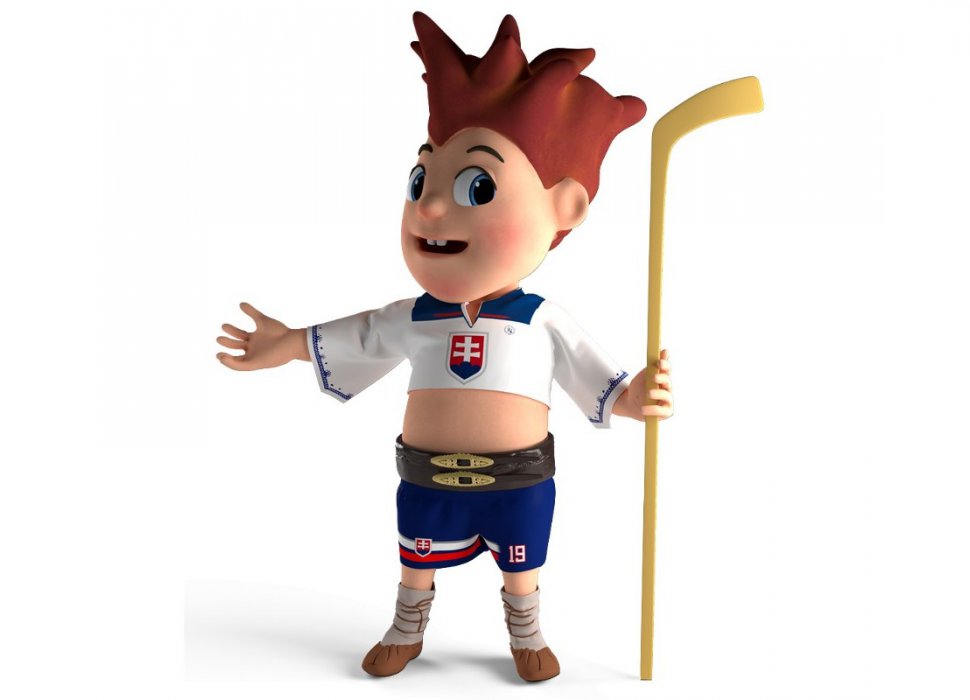 When the organizers of the World Tournament called for Mrs. Mária Herodeková to create a mascot, she did not know that hockeyball was such an important sport. With a funny situation like this, that is how Pacho was created at the very beginning. The logo ́s author Mária Herodeková, member of the Puppet Theatre in Nitra and currently being retired on pension: “ I remember unconsciously young boys from our street who used to play hockey in sneakers, with a small ball and whenever a car was approaching, they moved the goal out of the road. I imagined myself a naughty rascal with a bit of a rebelious characteristics, who plays for joy and and physical excercise that is craving to win,“ started Mrs. Herodeková revealing Pacho ́s birth and origin. „ I imagined with a smile, that if hockey sticks were famous hundred years ago, were there boys be chasing a ball in leather shoes with the trouserbelt from the folk costumes? But only if they could find any flatland during sheep herding (smile).“

It was a materialized imagination after all, and Pacho was created as an official mascot of the World Hockeyball Tournament 2019 in Košice. „ Just because it is so amusing and so traditionally slovakian at the same time, I dressed our mascot with a shortened hockeyball jersey with wide sleeves that resembles the shirt that is worn by dancers of the traditional slovakian folk dances and also the traditional slovakian leather shoes. His childlike tummy is wrapped by the typical belt with two buckles on the front. His stylish red hair make him even more rebelious and what ́s more, he doesn ́t have a helmet, he ́s a rebel!(smile),“ added Mrs. Herodeková. The conception of creating a mascot was building longer than usual, at first the organizers were keen to use some animal character but later they excluded wolf,bear and also a wildcat, and they agreed on a figure of a young boy who should be nice and Slovak. „Right after the first illustration came out this sympathetic young lad“, enclosed Mrs. Herodeková, who was participating on creating this mascot together with the general secretary of the Slovak Hockeyball Union, Július Száraz. The mascot is basically a happy boy from the central slovakian town of Detva with a fire in his hair, which is the main characteristic feature of the hockeyball as a volcanic sport, and has traditional slovakian elements – Detva folk shirt as a hockeyball jersey, leather shoes and a shepherd ́s belt. You could meet Pacho on a various events outside Steel Arena, but of course he will be mostly visible at the tournament sites. Pacho will be also available as a model in his life size as well. His effigy will be also possible to see on a Steel Arena ́s hockey cube in a various situations during the match and we can predict that they are truly worthy. 3D model and visualizations were under responsibility of Mr. Ján Prachár.